Triumph is pumping out hit after hit at the moment, building bikes that people want to buy. If we had to pick a machine from the ‘modern classics’ stable, it’d be a toss up between the Thruxton and the Street Twin.

Much as we love the trad café styling of the Thruxton, this sharp little tracker from Jason Paul Michaels is forcing us to take a closer look at the 900cc roadster. Jason and his crew have built what they believe is the perfect race bike from stock, with a shed-load of rad mods. 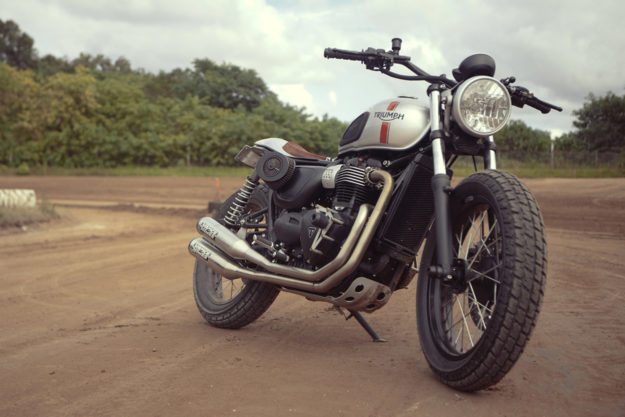 “When the Street Twin came out, with its low center of gravity, power delivery specs and wheelbase, I knew it was going to make a great flat-track bike,” Jason says.

“For hooligan racing, where you’re typically on smaller tracks, horsepower doesn’t always win. The Street Twin is light and flickable and has just the right amount of power to get through the gears and back down between the straights and corners.” 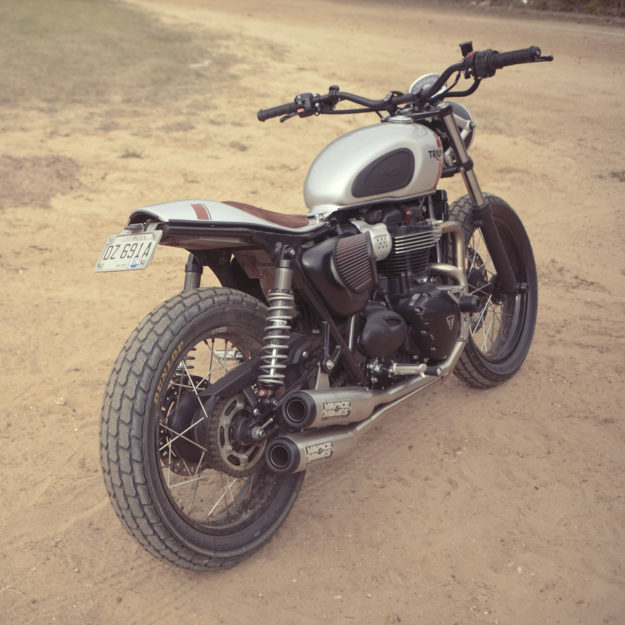 For Jason, whose Standard Motorcycle Co is one of the leading lights in the custom industry, the catalyst for getting out on the track came in the form of award-winning bike builder Roland Sands.

“I always wanted to race and just never found the opportunity until Roland introduced me to flat track. I was hooked. Something about sliding out of control while managing to maintain it was beyond thrilling to me,” says the self-confessed ‘Triumph guy.’ 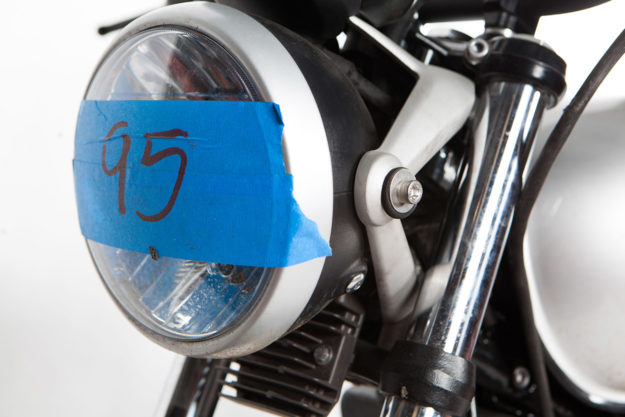 “When I got on the flat track and started racing, a sense of clarity came over me. While I was on that track, the only thing I thought about was that moment right then and there. It opened my eyes and helped me fall even more in love with motorcycling.”

Jason got on the phone to Triumph, and a Street Twin was soon delivered to his Standard Motorcycle Co. workshop. Sticking to the spirit of the Super Hooligan rules, Jason and crew would convert the Street Twin to race spec, and then offer a kit for other owners to do the same. 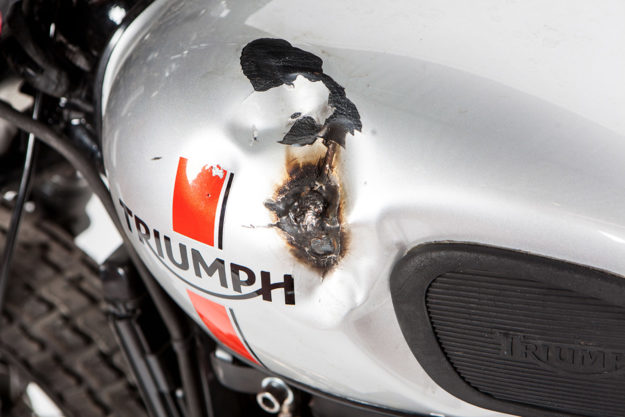 What you see is essentially a stock bike that can be 100% competitive in a race scenario. Unless you’re Jason, who managed to crash heavily on his first shakedown day with Johnny Lewis of Ten Training. (Fortunately, we snagged these photos prior to the incident.)

So Jason, how did you start the build? The tires are the single most important part of a flat tracker. So we hopped on the phone with Cameron Brewer at RSD to sort out the right size wheels to fit the Dunlop DT3 rubber we wanted to run. 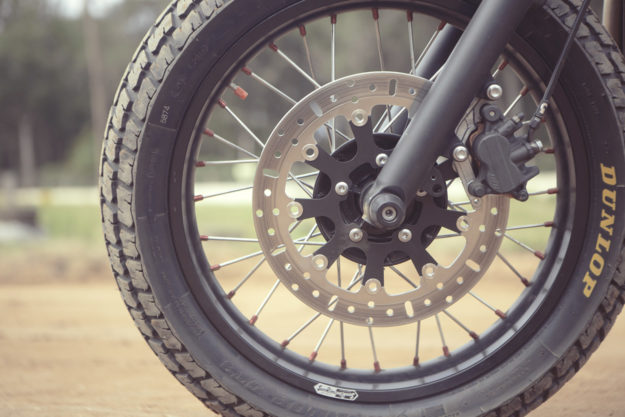 The only option was to speak to Dubya Wheels, because no one had done spokes yet on the Street Twins. Which posed another problem: What to do about hubs? With another quick call, a magic box from the UK arrived with two hubs we’d never seen from Triumph before. They were protos of hubs they were going to use on the wire wheel package. Score!

We ended up going with Sun aluminum rims with 6 gauge spokes and swaged nipples. It’s a rad combination that makes for a durable wheel setup. 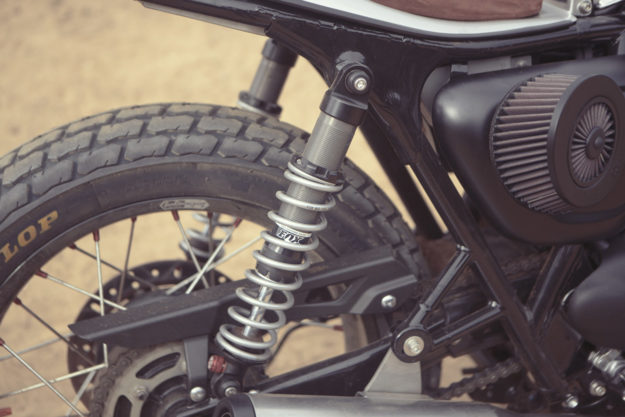 Did you modify the suspension? Fox Racing found a pair of aluminum-body race shocks from their line-up that worked perfectly. Will machined these great little aluminum caps that doubled as spacers for the heim (rod end bearing) joints.

What about the cockpit and controls? We opted to stick with the OE Triumph controls, but add a set of adjustable levers and Oury grips. The bars are Renthal Fatbars that we widened by 1.5″ to give a more traditional flat-track stance.

The factory clutch cable turned out to be long enough, but not the brake line. At that point, we decided to completely gut the ABS system. It was already going to be disabled, so why not? 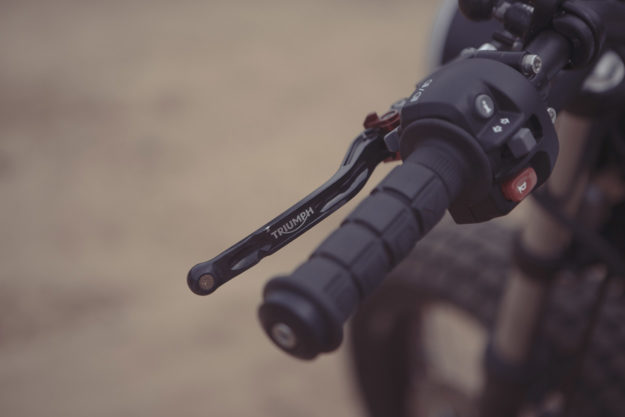 We made up new lines with Goodridge products from Dime City Cycles, and EBC made up a set of custom stainless floating rotors and high-performance pads.

This bike will still be ridden on the street, so we kept the upgraded front brake. To finish off the bars and provide some additional safety, a set of Delrin bar ends were machined in-house, and everything was protected with DEI wire sleeves. 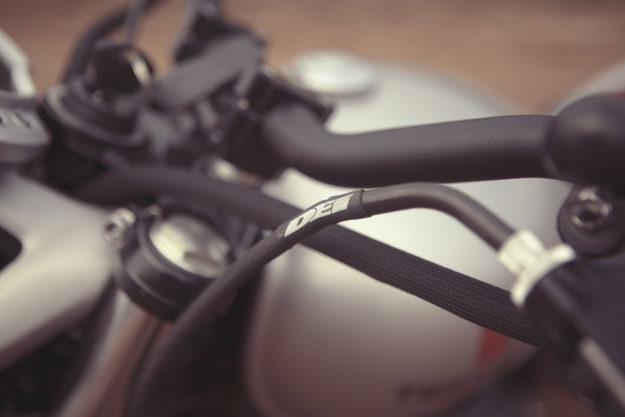 What mods did you make to the engine? The internals were left completely stock—it’s more than powerful enough for its purpose.

We designed and installed an airbox removal kit and the solution for an air intake was to plumb a single intake to the right side and run it right through the side cover. With the new air intake and wide-open exhaust, it’s a performer. But how was its desire to rip side ways and suck fuel going to be addressed? No one had tuned one of these as they were just released, and the ECU was locked.

So you called Triumph again? What happened next we’re not at liberty to say—but take our word for it, this engine has a TON more power than it ships with. 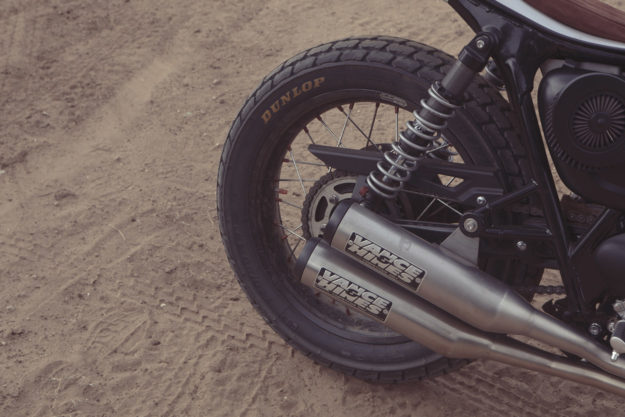 What did you do to the exhaust? We started with a pair of flanges and a bracket for the Vance & Hines mufflers, drawn in AutoCAD and laser-cut out of stainless steel. After the exhaust system was roughed into place, the mufflers were shortened and welded to the goods that Cone Engineering sent to us. A resonation chamber was added and we angled the cone inward, to keep the exhaust as tight to the frame as possible.

Any other mods that aren’t quite as visible? New case guards, designed and laser cut by Cody, with hand-machined Delrin sliders. Then we designed and installed a two-piece laser-cut battery eliminator kit: It tucks all the electronics up and out of the way, with an integrated LED taillight. The battery is now a Shorai Li-Iron unit that packs plenty of punch with none of the weight. It just requires some soldering and extending wires. 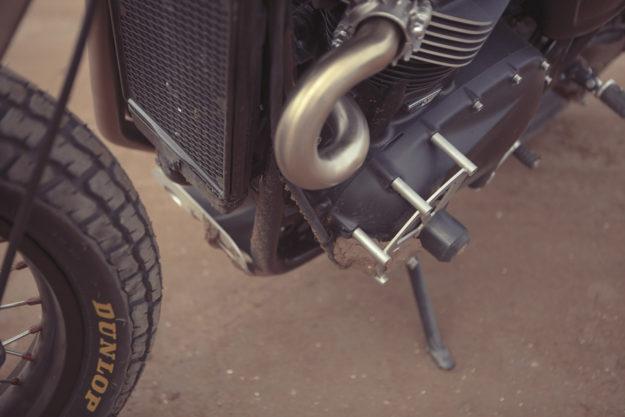 As for little details: the brake peg was modified to support a standard rubber foot peg, as opposed to the aluminum one. On the left side, the shifting was changed to a GP (reverse) shift, with the rear peg moved up and back a few inches.

Who made the seat unit? Marlow at Rusted Jalopy hand-shaped it from a single piece of sheet metal. (And didn’t use a hammer. Not even once!) The seat pad was done by Ginger from New Church Moto. The laser-cut flange at the front allows the unit to function like a stock seat that’s released with the key, but also hinges forward and rests on the tank. Perfect for trackside repairs and maintenance. 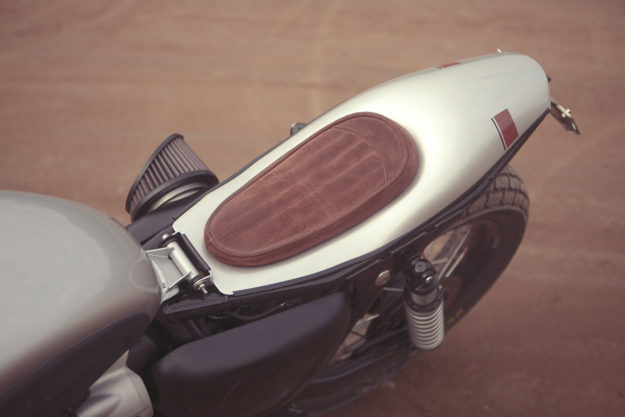 Now you’ve got us thinking. Any advice for someone who’s never tried flat tracking? What are you waiting for? Get out there! You can use an old vintage bike, or a new Triumph Street Twin or Street Cup. By just putting 19” wheels and some decent bars on it, you can turn it into something you can pilot around a flat track.

There’s also the benefit of building relationships. The first race I showed up to I had no intention of riding, but within 20 minutes I was—because the other racers wanted me to be able to experience it. That’s beautiful and is what motorcycling is all about. 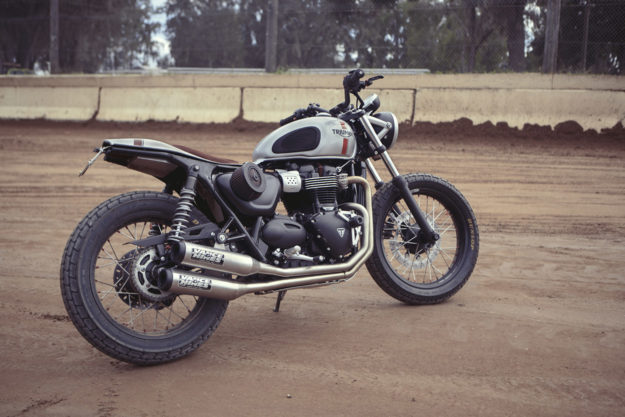