One of the most common discussion or themes you’ll hear about the current crop of 450 motocross bikes is how good they are out-of-the-box. While we spend out diligent time nit-picking every year in our Shootouts to pick the best, there’s also truth to how good the bikes are at the moment. Take for example the YZ450F, which took home the win in our 2016 450 Shootout. This bike has fantastic stock suspension, that works well across a large range of rider’s speeds and abilities. It has an extremely strong engine, which due to modern day EFI systems, can be tuned to suit your style. So if your upgrade money doesn’t have to be spent purely on performance, why not go for looks and some badass goodies? That’s what the crew from Dubya USA thought. 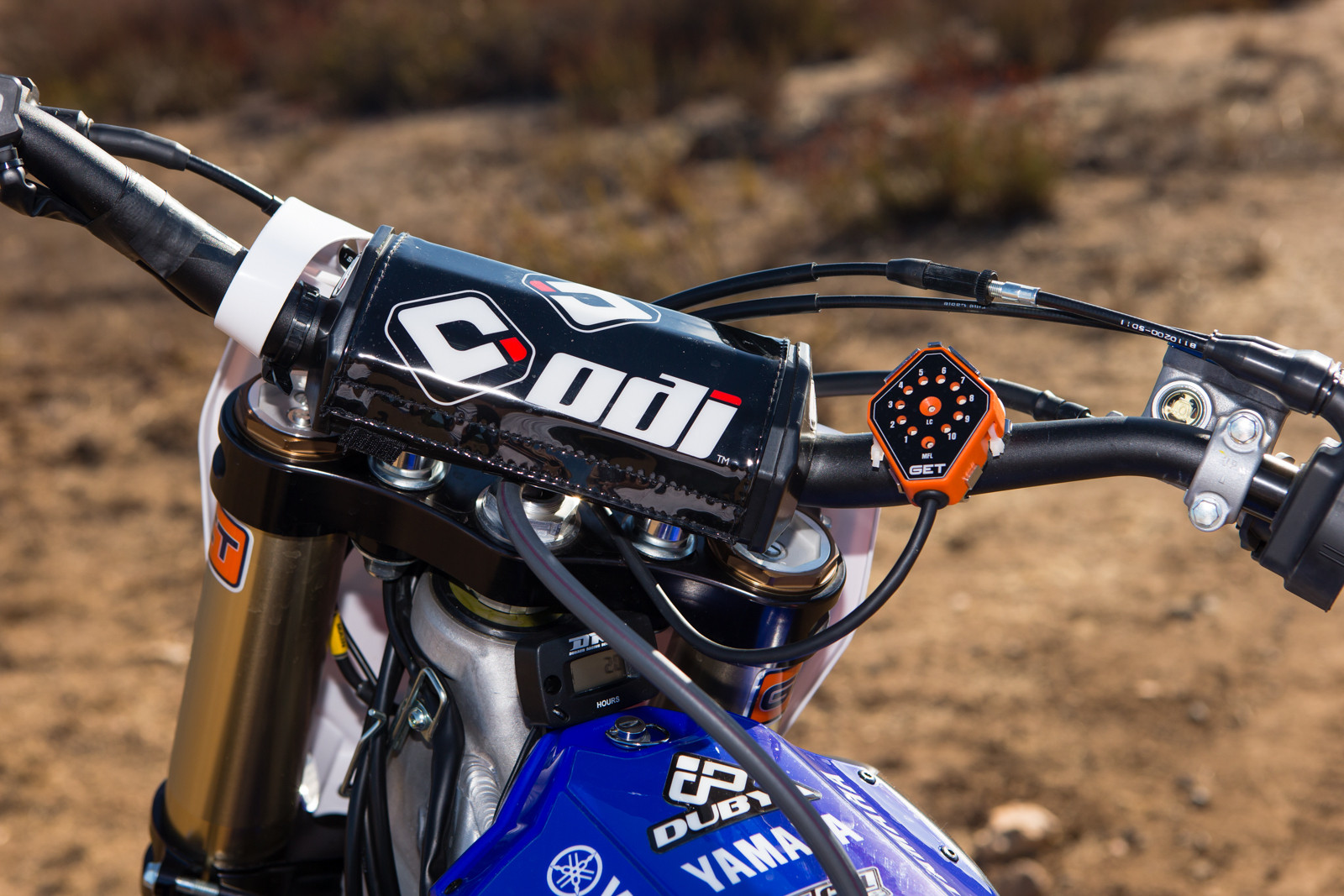 Being that the YZ450F was full of plentiful power, the first goal was managing it as best as possible. There were three main parts used in this case, the first being GET’s GP1 EVO system. This replacement ECU doesn’t just have alternative mapping, it also carries a launch control switch, and the GPU system. This system could be considered a type of traction control, as it senses RPM spikes to judge if there’s been a loss of traction, then cuts back the power through slight mapping changes. It also has a bit of adjustability as it has ten levels of activity, with level one being barely noticeable and with level ten jumping in quite often. Outside of the the ECU making the bike respond in a more crisp fashion, the GPU system also allows for riders to tune the power to their liking when things get difficult. Outside of this a full FMF Racing 4.1RCT carbon/titanium exhaust system was added, which cleaned the bike up in the higher RPMs and smoothened out the transition (or hit) at the lower-to-mid range. Lastly, a full Hinson clutch was used to maintain a consistent level of traction moto-after-moto, day-after-day. 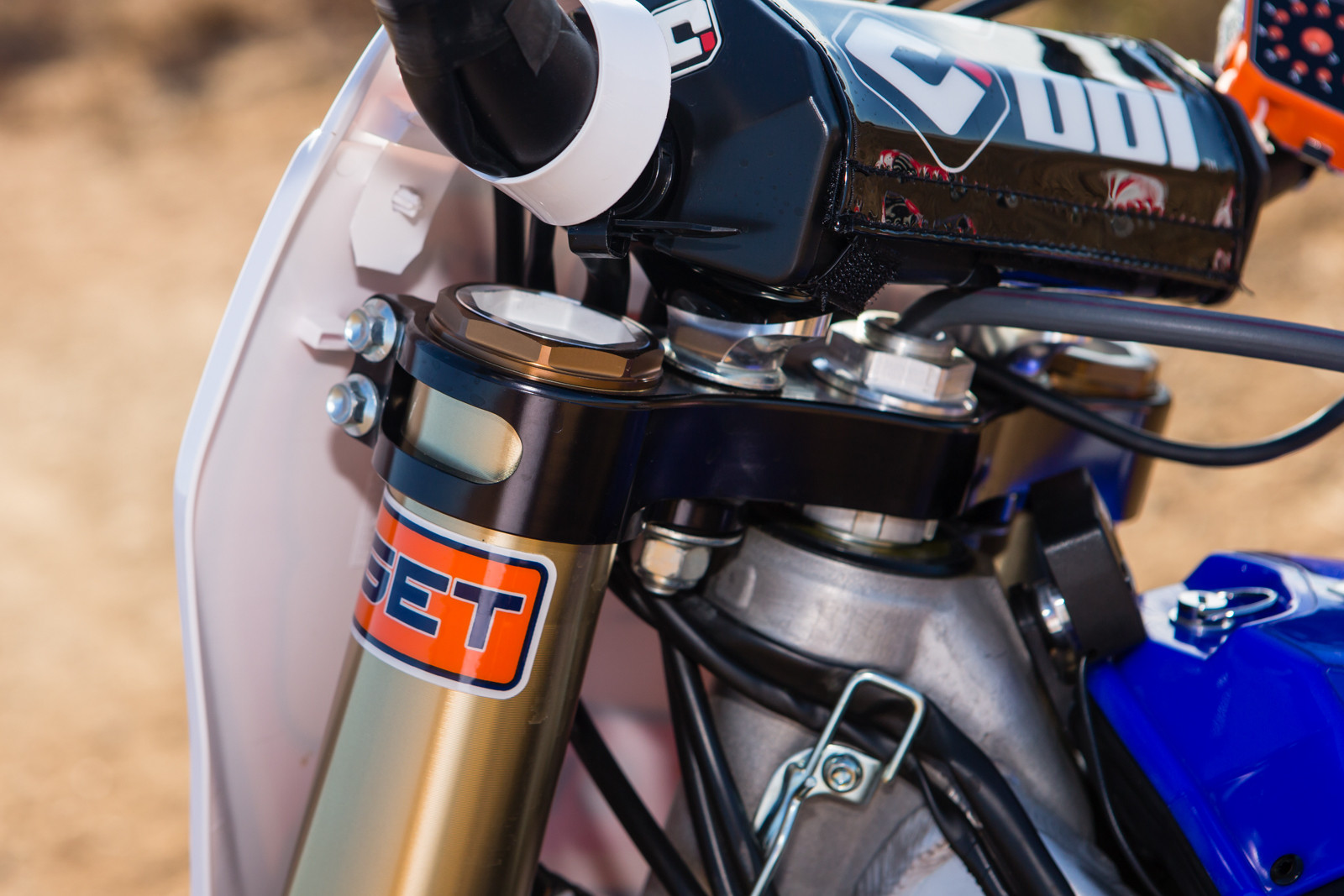 The other focuses around the bike included a bit of help in the handling department, going from the stock 25mm clamps to a set of Kite clamps with a 22mm offset. Kite’s clamps are fairly unique in look, with some trick cutouts along the side of the clamping area, along with being lightweight. The 22mm offset is a preference of mine on the YZ450F, as I like the added constant weight on the front tire with the change in the chassis balance and wheelbase. For me, this gives more of a consistent, weighted feel when entering corners; eliminating some of the distrust I have with the Yamaha in stock trim. As for the rear shock, JGR MX‘s adjustable rear linkage was added. This link arm has inserts along the rear mounting point, which can be popped out and flipped. The hole in the square insert is offset, so as you flip the blocks it changes the actual length of the linkage in one millimeter increments. As for the suspension, as we mentioned before the YZ450F is outstanding out of the box, so things were actually left stock here. Only clicker changes were applied as needed for the track conditions. 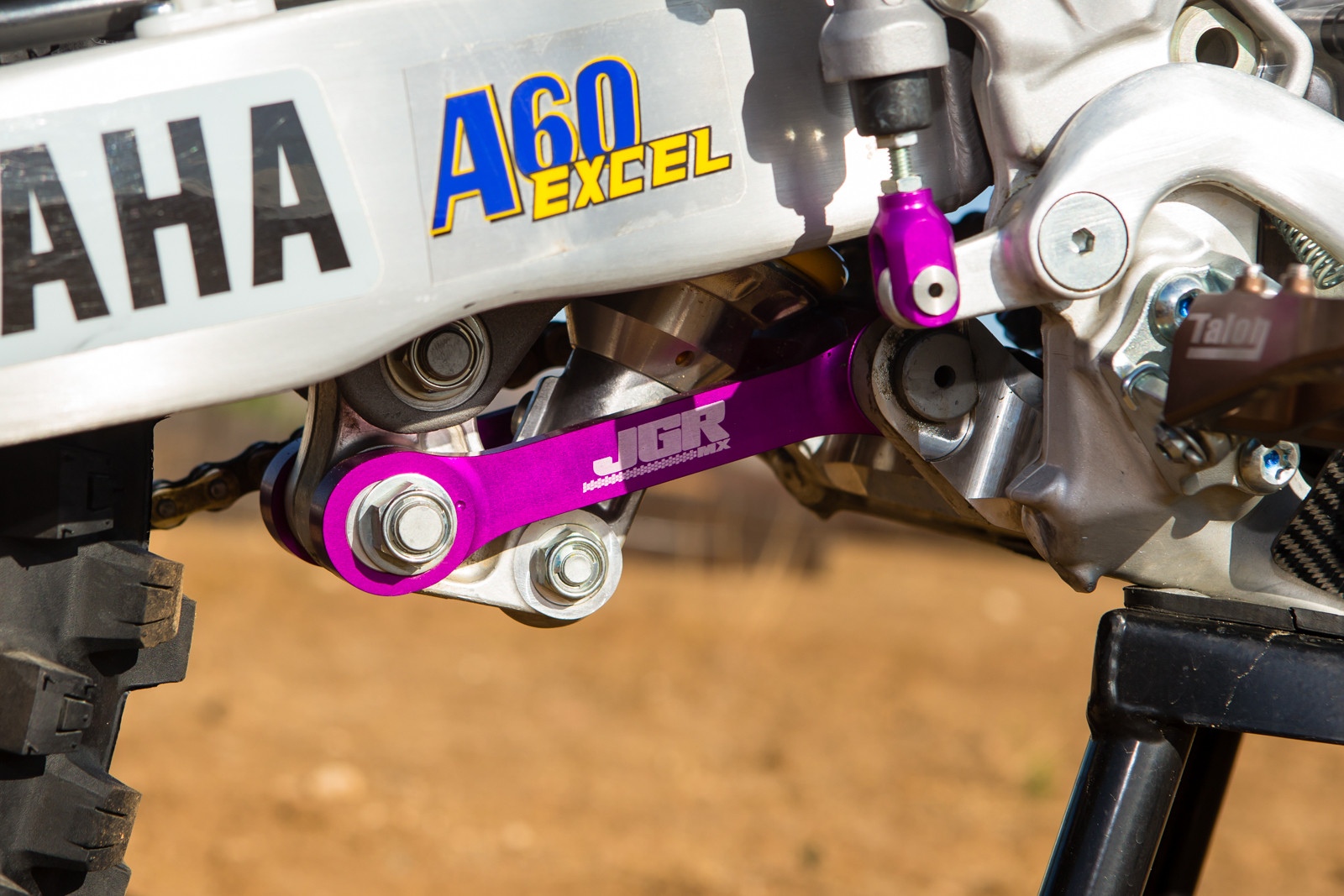 Last up for the chassis changes was something that’s been around for a bit but some have forgotten about, a radiator lowering kit from Dubach Racing. As most know, Dr. D (Doug Dubach) has spent years upon years testing for Yamaha and really knows the bikes inside-and-out. And for nearly the past ten years, Doug’s been lowering the radiators on his YZFs to improve the handling and overall feel of the machines. Even on the latest generation, these lowering brackets really complimented the 22mm clamps and continued the improvement of front end feedback/feel to the rider. 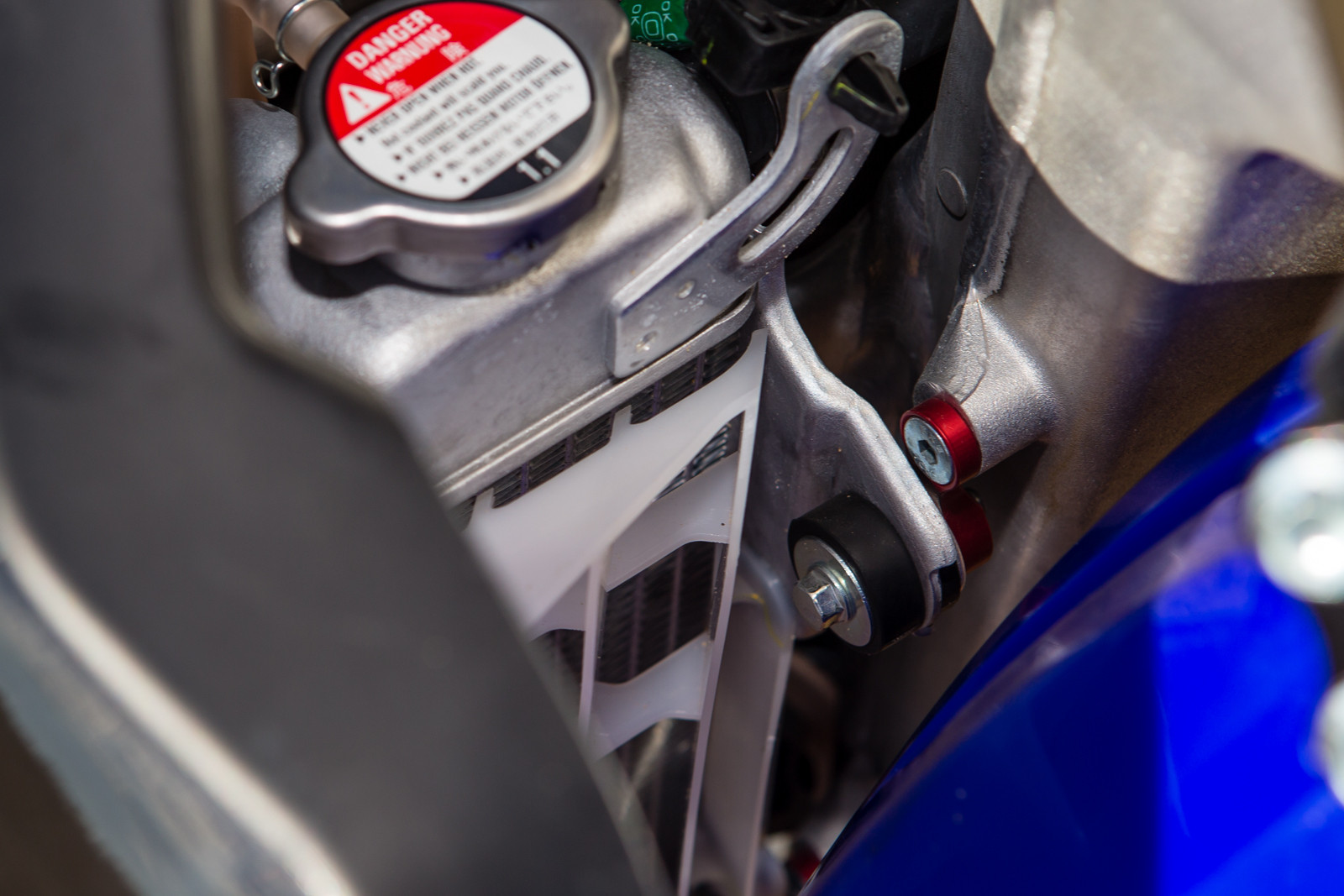 Of course this Yamaha wouldn’t be from Dubya if it didn’t have a trick set of wheels, and it came equipped with a set of Excel A60 rims tied to Talon‘s super lightweight Carbon hubs. These hubs feature billet aluminum outer sections, with a center connecting piece of carbon fiber. While the hubs are quite light, the rims themselves are stronger than stock but end up adding a bit of weight. To negate this weight, John Anderson assembled these wheels with a set of titanium spokes they’re currently testing. Actually, the set on this test bike had been already used for a few months in a wheelset by Jimmy Albertson, so we know they can hold up to pro-level abuse. 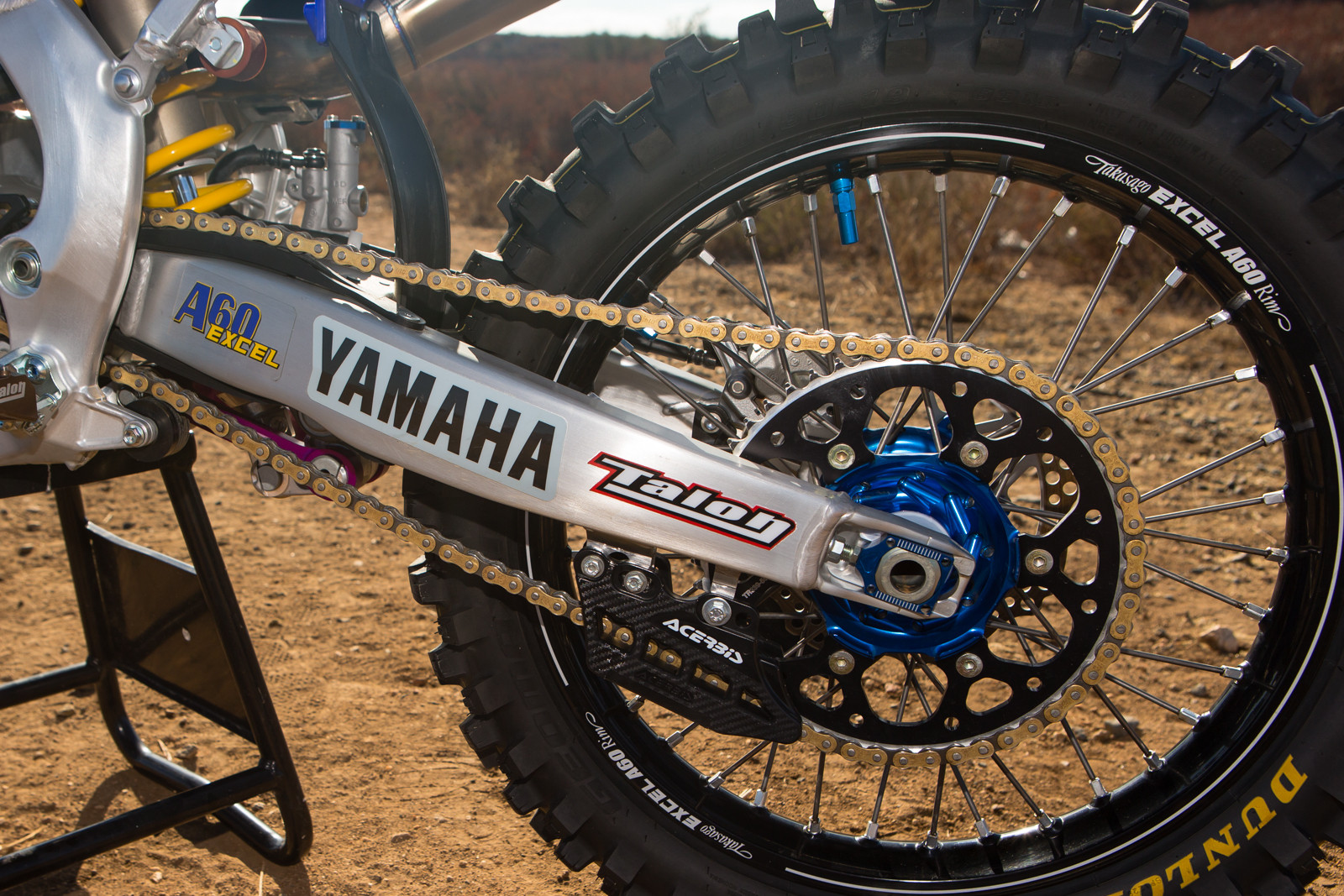 With this combination, Dubya is able to get a true pro-level wheelset that’s stronger than stock but keeps things lighter at the same time. 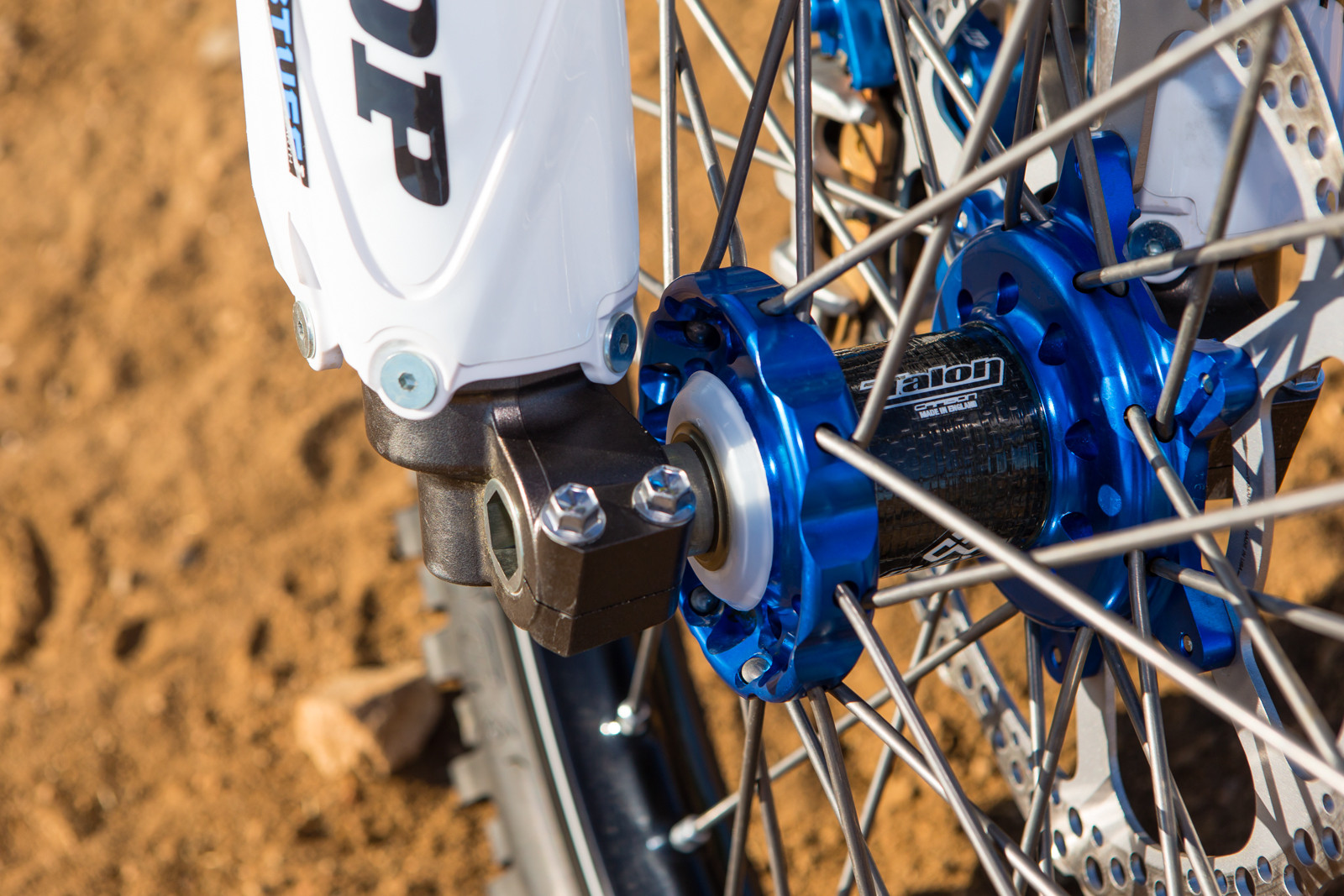 Attached to both the front and rear hubs are a set of MotoStuff brake rotors, with the front featuring an even larger than stock size at 280mm. There’s also an abundance of bling around the bike from Dubya themselves, such as valve stem caps and rim locks you can see here.

Along with other bling such as brake reservoir caps, engine plugs, and axle blocks. 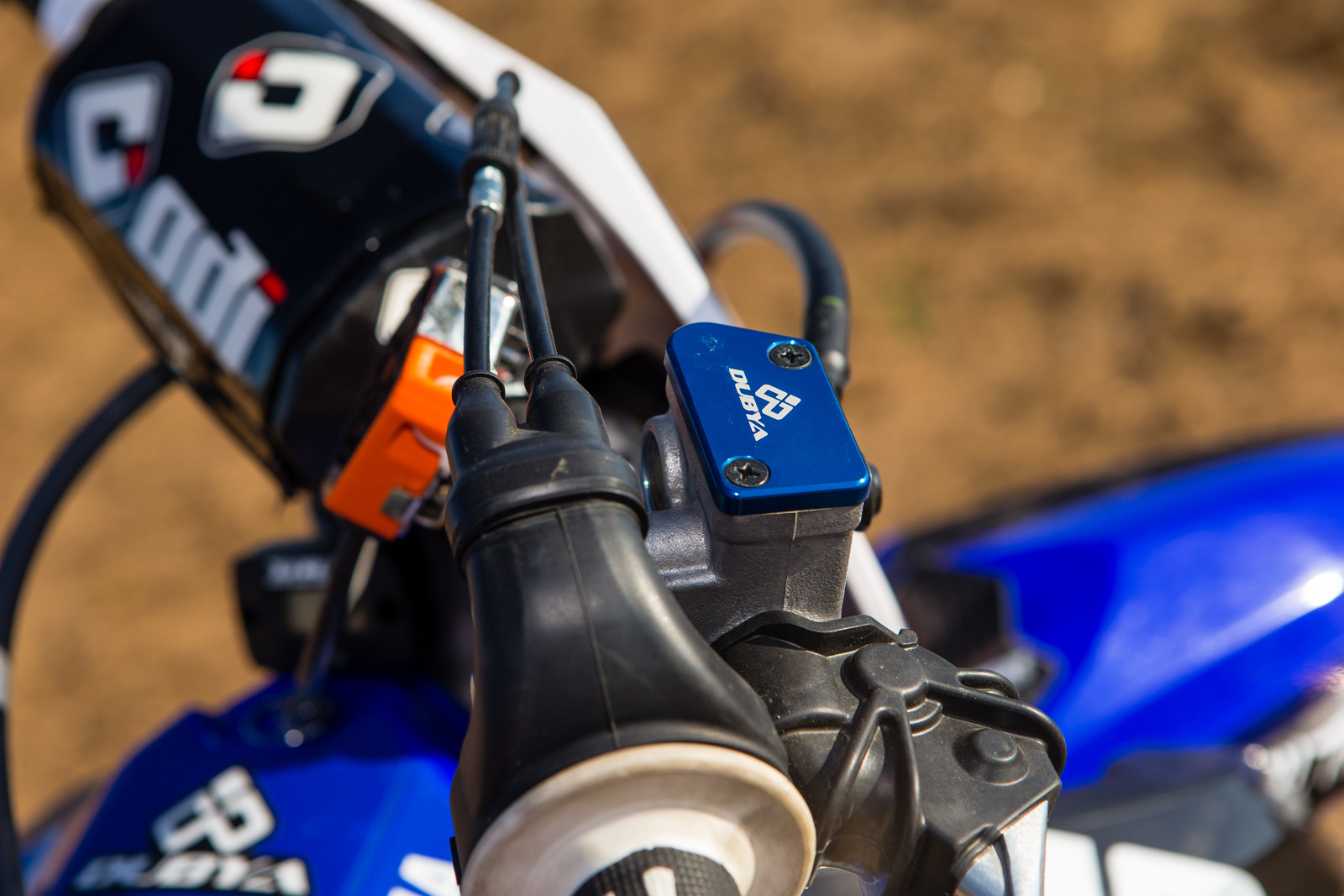 Overall, the current YZ450F is one of the few bikes out there that can benefit from immediate upgrades that doesn’t include having the suspension personally setup for you. Not to say that this wouldn’t help, as it would; it’s just the triple clamp changes, linkage, and radiator lowering kit can make for a more noticeable handling change depending on what you’re looking for. Some other goodies added were from ODI; including their ever more popular Lock-On grips and a set of their Flight handlebars. Along with a pair of studded footpegs from Talon and a set of Dunlop MX3S tires for consistent traction across the range of terrains we find on SoCal motocross tracks. Beyond that, the ability to move and change the power characteristics with the GET GP1 system and FMF exhaust system made the bike crisper, more powerful, but easier to ride all at the same time. Lastly, all the beefed up components from Dubya‘s wheelset, to JGR‘s carbon bits, MotoStuff‘s rotors, and all the cool bling does add a bit here and there to the performance…all while giving the bike a unique look that anyone wants out of their “personal” ride. 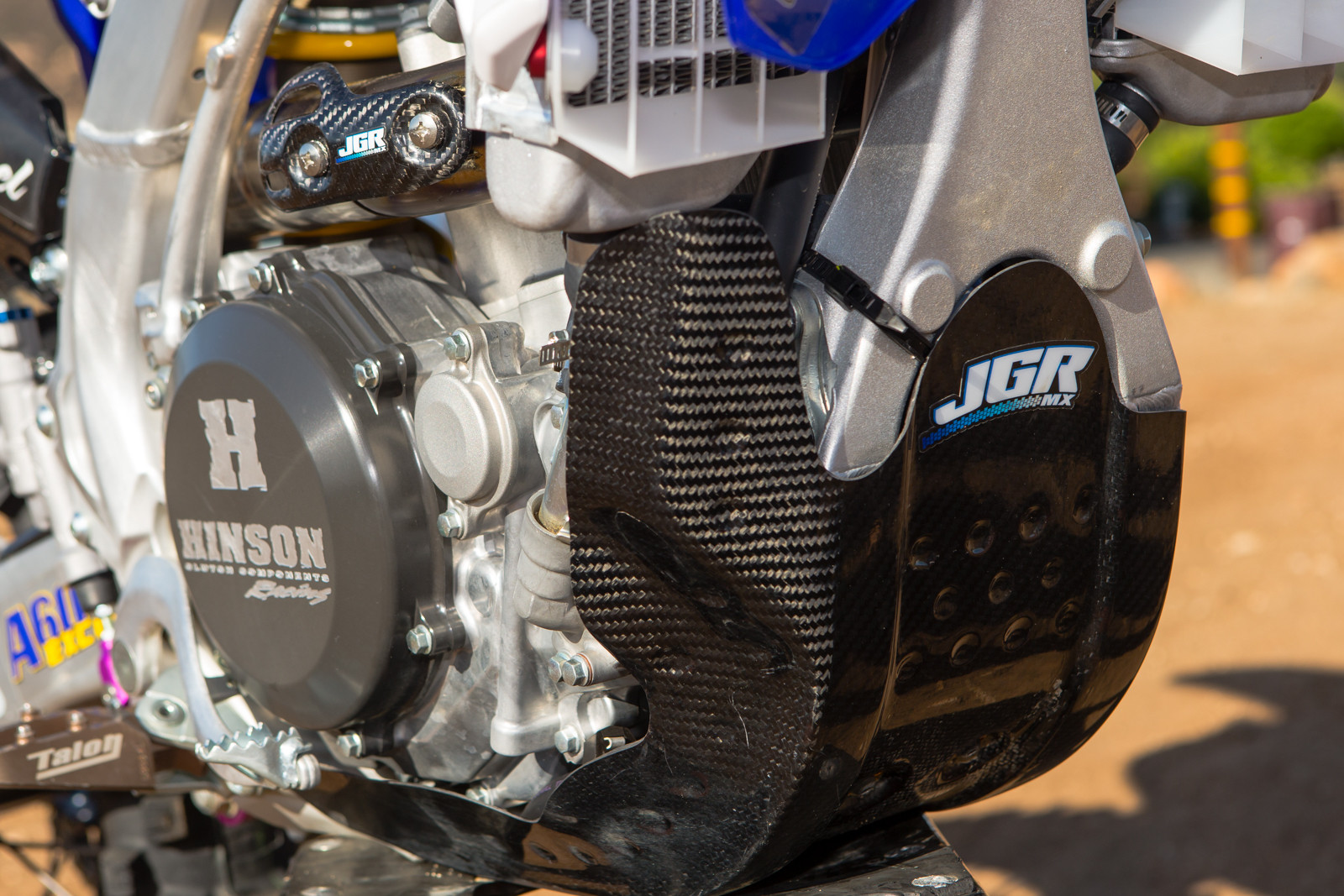